“The strength, the tension and the neatness showed from the very first moment her extraordinary musicality. She truly captured the attention of the audience throughout her performance with a vehement expression and a pianism of the first order in which colors, nuances, rhythmic formulations and lyrical inflections fit punctually into the intentionality and content of the score. We can say that her Schönberg is definitive, as is her music of Messiaen.” (REVISTA MUSICAL CATALANA. Francesc Taverna-Bech)

Pilar López-Carrasco began her musical studies at the Professional Conservatory of Music in Manresa. It started with the piano under the guidance of Glòria Massegú and Ludovica Mosca then later, working with Cecilio Tieles in the Liceo Conservatory in Barcelona. After completing her studies in piano and chamber music, she furthered her studies at the Franz Liszt Academy in Budapest, working with Kórnel Zémpleni (piano) and János Devich (chamber music).

She has expanded her knowledge with pianists such as Maria João Pires, Paul Badura-Skoda, Herbert Henck ….

For many years she has deepened her contemporary repertoire with the master Jean-Pierre Dupuy, the highly regarded specialist in contemporary music.

She has had the opportunity to release works by Spanish and foreign composers. Many music festivals dedicated to music of the last century have requested her performance as a soloist.

Among the many prizes and recognitions she has obtained are the First Prize in the XI International Competition of Contemporary Music Piano Xavier Montsalvatge (2002), president of the jury Claude Helffer, the Honorary Prize of the Conservatory of the Liceu of Barcelona of end of Higher Degree (course 90-91), the Second Prize at the XXIII Young Piano Performer Contest in Catalonia, the Oms i de Prat Prize, the long-term grant awarded by the Hungarian Government in 1993 in exchange with the Spanish Ministry of Foreign Affairs, The selection for the “National Chamber Music Show for Young Performers” organized by the Ministry of Culture, Middle and Elemental Degree awards of the CMM of Manresa …

She has also has extensive experience in the world of chamber music. Since 2005 to date she has formed a duet with Polish violinist Ewa Pyrek (duo Kroma “duokroma.awardspace.com”). This duo has collaborated with video artist Ester Xargay on the “Mites” project.

She has been part of the Guinjoan Trio, along with the cellist Arnau Tomàs and the clarinetist Josep Sancho, worked with the Trio MonMarTres and also has been pianist collaborating with the group Diabolus in Musica.

The versatility of Pilar has led her to piano performances with a ballerina or to participate in multidisciplinary actions such as the “surrealistic occupation of the square of Maria del Mar” in the year of Dalí.

In 2011 Pilar collaborated with Ewa Pyrek, violin, Matthias Weinmann, cello, and Francesc Navarro, clarinet, in the performance of the “Quartet for the End of Time” by O.Messiaen.

She has participated in the Sonatas and Interludes integral of John Cage, along with Jean-Pierre Dupuy and Idoia Rodriguez, that took place in the Academy of Fine Arts of San Fernando in Madrid in 2015.

She is currently working on a project to play Olivier Messiaen’s “Visions de l’Amen” for 2 pianos with contemporary music master Jean-Pierre Dupuy.

As a complement to her training in conservatories, Pilar has a degree in History of Art from the Universitat Autònoma de Barcelona. 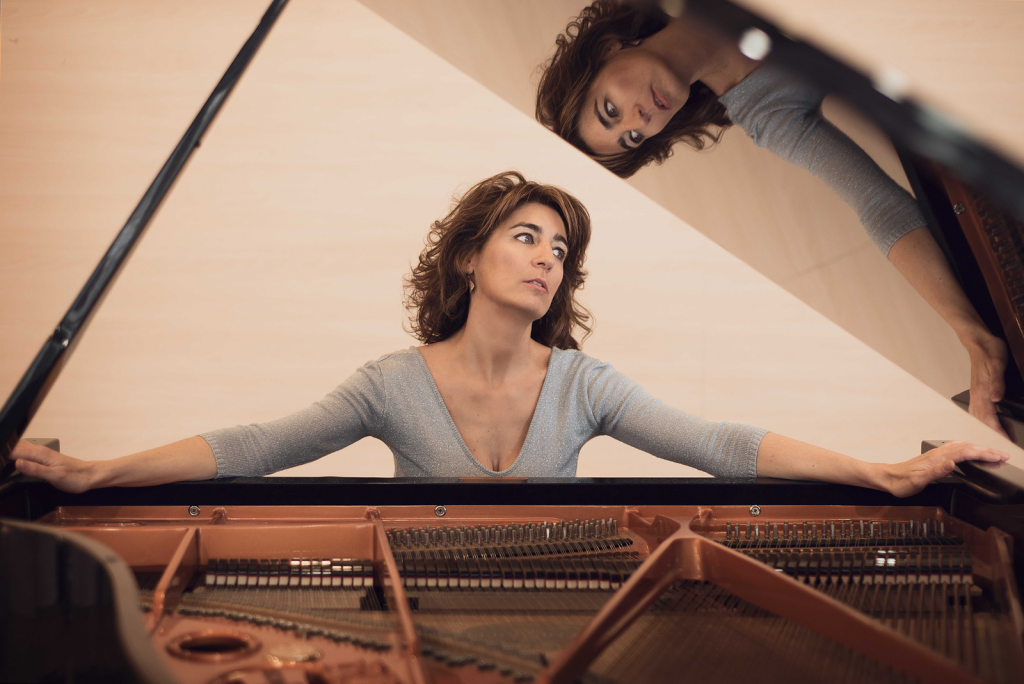